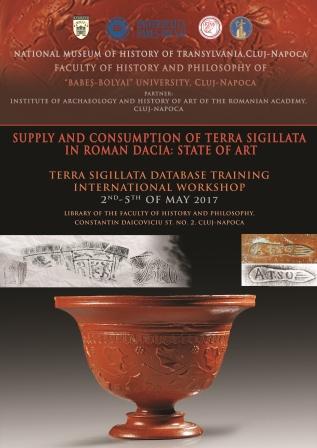 Terra sigillata – Roman luxury pottery – represents one of the most important and complex categories of archaeological artefacts. Its diffusion throughout the entire Roman world offers precious information regarding the economic life and the complexity of trade relations established between production centres and distribution markets in the provinces of the Roman Empire where this type of pottery was demanded and consumed.

In recent years, the study of terra sigillata pottery has known a new impulse as a result of the update of Felix Oswald’s 1931 „Index of Potters’ Stamps on Terra Sigillata”. Mainly based on more than four decades of effort made by Brian Hartley and Brenda Dickinson to collect over 400.000 of individual stamps belonging to more than 5000 potters that produced terra sigillata in the great pottery workshops from the Western provinces of the Roman Empire, the project initiated by the Universities of Leeds and Reading (UK) since 2006, in collaboration with Römish-Germanisches Zentralmuseum in Mainz, resulted in the publishing  of the nine volumes of “Names on Terra Sigillata: An Index of Makers’ Stamps and Signatures on Gallo-Roman Terra Sigillata (Samian Ware)” (2008-2013). Moreover, an European database was created and hosted by Römish-Germanisches Zentralmuseum in Mainz (RGZM) – Samian Research Database (https://www1.rgzm.de/samian/home/frames.htm), meant to bring up to date and add up information revealed after the publication of the aforementioned work.

In as much as the data comprised in the “Names on Terra Sigillata” did not include also the stamps of potters whose products have reached Hispania, Northern Africa, Italy and the Danubian provinces (including Roman Dacia), the purpose of the workshop that we put forward is, on the one hand, to promote the research stage of Samian ware in the province of Dacia, and on the other hand, to make a contribution in the formation of  new specialists that will take part in the development of an international network meant to bring up to date the database housed by the Römish-Germanisches Zentralmuseum in Mainz, with new but also missing information.

Therefore, you are invited to take part in the International Workshop that the National Museum of Transylvanian History and the Department of Ancient History and Archaeology from the Faculty of History and Philosophy of the University “Babeș-Bolyai”, in partnership with the Institute of Archaeology and Art History of the Romanian Academy, are organising in Cluj-Napoca on May 2nd-5th 2017, within the preliminaries of the Congress of the International Association Rei Cretariae Romanae Fautores (of specialists in Roman pottery), that will be held in September 2018 in Cluj-Napoca (http://www.fautores.org/pages/next_congress.htm).

The international workshop will contain a presentation of the database of European data regarding terra sigillata, made by our guests – dr. Allard Mees from RGZM and Geoffrey Danell (University of Nothingam), followed by an introduction/overview reflecting the state of supply and consumption of Samian ware in Roman Dacia, made by a number of Romanian specialist (May 2nd). The theoretical presentation will be followed by practical classes carried out by Brenda Dickinson (Leeds University)  (drawing and identifying potter’s stamps and decorative motifs from terra sigillata), while Allard Mees and Geoffrey Dannell will instruct participants on the way to operate with the database of terra sigillata data (May 3rd-5th).

The training is addressed to both students of all levels of study (undergraduate, master and PhD) of Archaeology and Ancient History and students from other faculties, but also to researchers interested in the subject.

Because of the material and technical aspects that participating in this workshop implies, the number of possible participants is limited (to series of maximum six participants per session). The training is free of charge for all attendants. However, they will have to pay for their own accommodation and meal expenses.

Those who wish to take part in the workshop are asked to fill out the attached registration form by April 18th 2017 and send it to one of the addresses: viorusu1@yahoo.com; romcritan@yahoo.com.

The workshop’s program will be made available after the centralization of all registration forms.